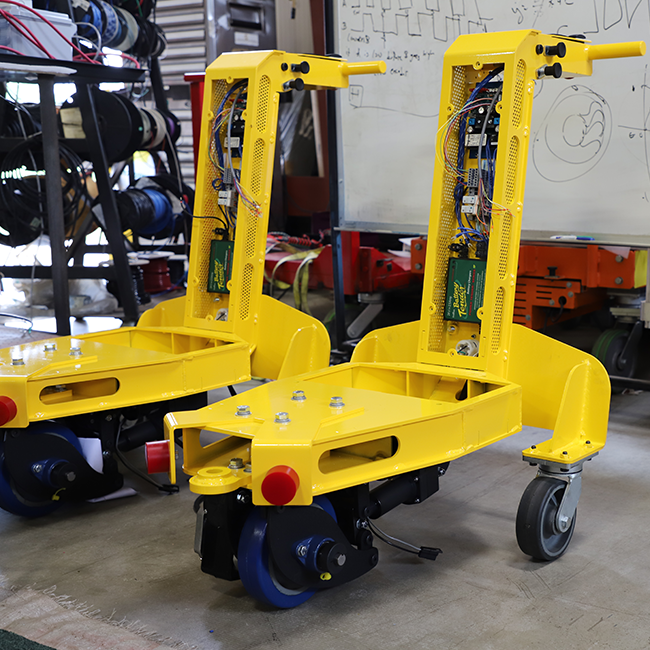 Replacing a regular caster with a motorized drive caster is the first major step in the direction of improving efficiency, increasing load capacity, and reducing operator injuries. The next major step is deciding what drive system is best suited for your work environment needs.

First, let’s address and define what is a drive system. A drive system is a motorized system that includes the drive wheel, caster rigs, and a motor. The motor has a wiring connection to a battery and a logic controller. With the electrification of casters, moving heavier loads can be done with ease.

Of the four main drive systems, we will begin with the breakdown of the Single Drive Caster. The single drive caster is in a fixed position, and velocity is controlled by speeding up or slowing down the drive wheel. The system reads input from a single-axis joystick to develop a global speed command. For this product, steering is done manually through the operator.

Uses for the Single Drive Caster.

The Single Drive Caster can easily be attached to an existing cart to increase load moving capacity, and improve movement and safety.

Advantages of the Single Drive Caster.

Of the four different drive systems, the single drive caster is the least expensive. It is also the easiest to learn to operate with a single-axis joystick. In addition, it is simple to install on existing carts.

Disadvantages of the Single Drive Caster.

Uses for the Trike Drive System.

The trike system is ideal for environments consisting of multiple carts since it can easily be transferred from one load to the next.

The main advantage of the Trike Drive System is its ability to be used in multiple ways around the work environment since it can easily be transferred to different carts.  Like the Single Drive Caster, it is easy to operate and has a minimal cost.

Again, with the single-axis joystick, the Trike Drive System has limited movability.  Thus, moving to precise locations can be challenging as well as operating in limited space.  It also has a lighter load capacity due to the single drive caster.

The Tank Steer Drive System is based on the common drive system known as tank steering.  The drive wheels are in fixed positions, and steering is controlled by speeding up or slowing down the wheels on one side of the cart relative to the other.  The system reads input from a dual-axis joystick to develop a global target heading and a global speed command.  Stable control is developed through motor feedback.  Feedback is created on the motor controller’s internal PID feedback algorithm to tightly control motor speed.

The key advantages of the Tank Steer Drive System include the increased driving maneuverability and the increased load capacity due to the additional drive caster.

The Halo Drive System is an omni-directional drive system featuring steerable drive pods which can be combined in different arrangements to account for size and weight requirements.  Sophisticated mathematical calculations that derive the inverse kinematics for three-degrees-of-freedom control allow an operator to move a cart by commanding a 3-axis joystick.  Each drive pod can rotate 210 degrees independently.

The omni-directional system reads input from the 3-axis joystick to develop a global target heading and a global speed command.  Stable control is developed through sensor feedback.  This feedback is created at two levels, known as a cascading PID algorithm.

When using the HALO Drive System through the 3-axis Joystick:

SCALABILITY AND MANEUVERABILITY KEY ATTRIBUTES OF THE HALO DRIVE SYSTEM.

The HALO Drive System is the most advanced of the four drive systems.  It typically consists of four drive casters, but additional drive casters can be added to meet specific needs for increased maximum load capacity.  The 3-axis joystick with 210 degrees of freedom provides detailed driving orientation and is able to reach very specific locations.

Advantages of the HALO Drive System.

There are major advantages to utilizing the HALO Drive System.  The HALO drive pods allow all the motors to perform both steering and driving functions simultaneously, compared to other omni-drive systems that only allow one motor to steer and another to drive.  This advantage results in a much higher power density and compactness, creating a lower costing product with a higher drive performance.

The HALO Drive System is extremely maneuverable.  The omni-directional motion available with the HALO is a key advantage for fitting into tight spaces.  Another significant advantage is scalability.  An increased load capacity is easily accomplished by adding the required number of drive pods.  The HALO can accommodate any number of pods from 2 to 20, resulting in a load range from 5,000 lbs. to 200,000 lbs.  The HALO Drive System also comes with a variety of options such as a wireless hand controller, a lifting system, safety sensors, and wireless charging.

Disadvantages of the HALO Drive System.

The HALO Drive System is the most expensive drive system, due to the increased number of drive casters and load capacity.  The 3-axis joystick steering might also take some extra training to gain familiarity before operating in tight spaces.

WHAT IS A MOTORIZED DRIVE CASTER?

HOW TO CHANGE THE MAXIMUM SPEED OF YOUR DRIVE SYSTEM

HOW TO CHANGE THE ACCELERATION OF YOUR DRIVE SYSTEM